Justin Bieber At The Kings Oak – The Whole Story

So before Justin Bieber walked in it was just a very normal quiet October autumn Thursday here at the Kings Oak, with just two couples in the Gastro Pub having something to eat. It was around 4:30 pm and the staff shift change was due at 5:30 pm. Everyone was going about their duties efficiently as ever. Barman Rob was checking stock, bar manager Lyndsey and runner Tomas were stocking up on cutlery and bar manager Amy Potter was just completing the dressing of our beautiful Kings Room ready for a wedding the following day. The events teams were busy making appointments for clients and completing wedding quotations. Little did they know that everything was about to completely change in their day. 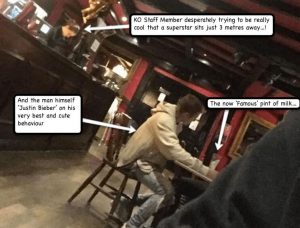 It had been noted that three ‘people carriers’ with blacked out windows had been parked up in the Kings Oak car park for some time. We get lots of film crews up here so nobody thought anything too strange. Even when eight ‘heavily built’ guys had entered the Gastro Pub and had ordered food for themselves, this was considered nothing strange. They were just finishing their meals when another chap enters the Gastro Pub and asks if it’s OK if he brings his boss into the pub to order some food…! Strange request but the answer is yes of course. Moments later, the staff and the four patrons in the pub are busy picking their ‘dropped jaws’ off the floor as Justin Bieber strolls in with his bodyguard. Rob gathers his composure greets him and Justin shakes his hand and asks for the menu. He’s genuinely a lovely guy and says hi to all of the bar staff and guests but asks that there are no requests for ‘selfies’ with him as he wants to relax over his meal without the stress of fans arriving. We understand and are happy to oblige. The order is placed, Salmon & Mash and the all-important ‘Glass Of Milk’, what’s more….it’s semi-skimmed..!

Relaxing After A Forest Walk

Justin Bieber seems genuinely very relaxed and the bar staff engage in various conversations with him. He shows interest in most of them but the girls, of course, are getting most of the attention and he enquires about whether our Victorian building is haunted. He is told yes and they explain the strange sightings we’ve had here. He confirms he’s been for a quiet walk in the forest with a good friend to ‘get away’ from the bustles of everything during his tour dates at the O2 Arena. His meal arrives and he is left to dine in peace. Whilst this is going on, one of our other guests has decided to sneak a couple of pictures using their mobile. Our assistant events manager Skye sees this happening and asks that the guest refrains from posting anything until Justin Bieber has departed to honour our promise to him and they agree.

Everyone is finished at 6 pm. Justin and all of his entourage get ready to leave but before he does, it’s hugs all round for the staff. Needless to say, the shift change was at 5:30 pm but no one had bothered to clock out…. a fact not missed by the boss and rectified shortly after the departure of Justin Bieber. Skye asks for a copy of the pictures taken by the guest and they are happy to oblige and the posting onto Facebook takes place. What happens then is that the whole world seems to zero in on the Kings Oak. Facebook comments take off, twitter goes into overdrive and hordes of fans start appearing at the Kings Oak.

The Media Descends Upon the Kings Oak

The next day, every paper is calling to take statements and ask to use our pictures, including The Mirror, The Sun, Evening Standard etc. and then the radio stations like Capital FM get hold of it and the phones don’t stop… it’s madness and all of a sudden we start to wonder whether we’ve done the right thing posting about it. Comments are varied from “OMG he’s at my local” to “Nah, they are making it up”. The whole story takes on a life of its own and very soon we have lost control of it and being in the limelight becomes a daunting experience. Some comments are twisted and changed to make the Kings Oak be a villain and we decide to simply go into a shutdown mode. No one gets any more comments from us.

They say that any publicity is good publicity. At the Kings Oak we’ve certainly had our fair share with TOWIE being filmed here, ‘Don’t tell the Bride’, some top named musicians appearing as well (Simon Webbe comes to mind). If we were to have our time again with Justin’s visit would we have posted on social media? Probably is the answer but what it has shown us is the enormous pressure that these superstars go through and how easily headlines get distorted to the extent that you have no answer to the situation. Scary stuff. The glass that famously was put onto eBay by our manager Amy Potter was sold for £30.99 and the money was given to charity. The ridiculous figure that appeared of £65,000 was all fake and we have no idea who put it up there but in the world of Media, it seems that anything goes.

What The Papers Didn’t Know

With just one final twist to the story and a secret, we did keep to ourselves. Justin Bieber returned very early on the next Saturday morning with his crew for another walk in the forest. The same vans parked up in the Kings Oak car park and Justin and his friends purchased coffee from the Kings Oak Cafe. The cafe manager Faye managed to get one photo of him but this time we decided that his privacy (and our own sanity) should prevail and she was asked to keep it to herself. We just kept our mouths closed and our social media accounts closed.